The Book of the Two Principles 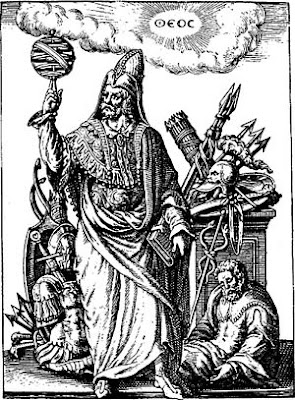 The Book of the Two Principles is the largest surviving work of Cathar literature. It provides an important witness to the sophistication of Cathar argumentation against orthodox theology -- a debate in which the Good Christians prevailed, at least in the contemporary judgment of a large portion of the population of Southern France during the twelfth and thirteenth centuries. It should be remembered that the Good Christians dominated the argument and won the heart of Languedoc; it was a genocidal and generation-long crusade against them by Pope and Kings that they lost.
The work is composed of seven sections, all probably written in the early thirteenth century by an Italian Cathar. The most likely author is identified as John of Lugio, a "True Christian" who lived in the vicinity of Lake Garda (between Brescia and Verona) around 1240. In the fourteenth century the manuscript fell into orthodox hands, and remained in Dominican monastic libraries until being transferred in modern times to the Biblioteca Nazionale in Florence. It was first published in 1939 -- after six hundred years of suppression.
Whoever the author, he was very well-read and a skillful debater. It is obvious he was thoroughly familiar with the Latin Vulgate Bible and with the arguments used by Catholic polemicists against the Cathars. In evidence of the erudition of its author, the treatise has been noted to include citations from Roman law, a pseudo-Aristotelian work, and phrases from the writings of Solomon ibn Gabirol, the eleventh century Andalucian Jewish philosopher. The author explains his purpose in his introduction:


Since many persons are hampered in rightly understand the truth, to enlighten them, to stimulate those who do have right understanding, and also for the delight of my soul, I have made it my purpose to explain our true faith by evidence from the Holy Scriptures and with eminently suitable arguments, invoking to my efforts the aid of the Father, of the Son, and of the Holy Spirit.

This is a long text (about 35,000 words in translation); it is presented here as one single document. This version is closely based on the translation appearing in: Walter L. Wakefield and Austin P. Evans, Heresies of the High Middle Ages (2nd ed., New York: Columbia University Press, 1991), p. 511ff. The text presented below includes a few minor corrections and occasional minor changes in phrasing (and probably a few new typos). We recommend serious students consult the published edition, which has extensive notes that are not reflected in this online edition.

The Book of the Two Principles

Part VII. On Persecutions
[1] On Striking' the Shepherd.    "For it is written, 'I will strike the shepherd, and the sheep of the flock shall be dispersed.'" "The shepherd" means Christ; "the dispersed sheep of the flock" refers to the disciples. But the true Lord God did not by His own act absolutely and directly strike His Son Jesus Christ, for if He had committed this murder by His own act exclusively and essentially no one could incriminate Pilate or the Pharisees or Judah in any way, for they would have carried out the will of God fully; on the contrary, it would have been a sin to resist the will of God. Whence the explanation is this: God "struck" His Son by enduring His death, for they were powerless to carry out the deed unless the Lord himself had permitted it. And this is what Christ said to Pilate: "Thou shouldst not have any power against me unless it were given thee from above." "Unless [permission] were given," He said—not "unless the power were given"—as though He were saying: Unless it were allowed you by God, you would have no power to do me any hurt. For it was the evil principle through whom Pilate and the Pharisees and Judah and the others committed this murder. The true Lord God endured this wicked deed, being unable in a better way to deliver His people from the power of the enemy. He says through Isaiah: "For the wickedness of my people have I struck him." For the disciples, too, have been dispersed, that is, put apart from Christ by the power of evil spirits, for a certain purpose, which was not a good one, as is subsequently recorded: "Then the disciples all leaving Him fled."


[In the manuscript, the passage just translated is followed by miscellaneous items, chiefly excerpts from the Pauline epistles, which occupy one folio. Thereafter appears the Catharist ritual in Latin -- see The Cathar Ritual -- and then the following passages on persecution.]


And now the book is finished; let us give thanks to Christ.