Syria and the Swinging Pendulum 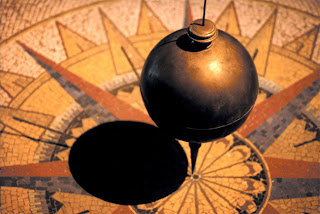 The Tide has Changed

Since 9/11 the state’s power has grown exponentially and it’s ability to wage war and infiltrate a digitized populace has reached epic proportions, but the pendulum has reached its apogee.  The Obama Administration has made a terrible miscalculation regarding the public’s reaction to it’s proposed military intervention in Syria and it appears the President will not be able to garner the votes needed in congress to pass the resolution in support of his plan to attack Assad.

As Private Manning sits in a prison cell and Eric Snowden lives in exile, AIPAC is working tirelessly to lobby congress to pass the war resolution, but the public’s heart is with Snowden and Manning, not Netanyahu.  If Obama and AIPAC lose this vote their grand plan to confront Iran’s nuclear aspirations will crumble.  If Americans reject a military intervention in order to punish Assad for his supposed use of WMD’s,  how will they ever support taking on the Iranian regime for just having them?  This is not the same America that re-elected George Bush in 2004.

Secretary of State John Kerry made a forceful argument in favor of intervention:

"In an increasingly complicated world of sectarian and religious extremist violence, what we choose to do -- or not do -- matters in real ways to our own security.  Some cite the risk of doing things.  We need to ask what is the risk of doing nothing.

It matters because if we choose to live in a world where a thug and a murderer like Bashar al-Assad can gas thousands of his own people with impunity even after the United States and our allies said no, and then the world does nothing about it, there will be no end to the test of our resolve and the dangers that will flow from those others who believe that they can do as they will."

Many Americans would have rallied to this call for war in the early years of this century, but not now.  They know that President Obama has killed hundreds of innocent civilians with drones, some of them even Americans.  They know that hundreds of thousands of Iraqi’s were killed under false pretenses.  Not only were innocents killed and money wasted, but strategically Iraq has moved under the influence of supposed arch enemy Iran while the Taliban are simply waiting for the NATO troops to leave before making their final assault on the puppet government installed in Afghanistan.

What was also conspicuous in Mr. Kerry’s speech was what he didn't mention.  Are the Saudis, the Qataris, and the CIA also ‘thugs’ for financing, training and facilitating a civil war that has killed over a hundred thousand people?  And why are the Saudis and Qataris doing this and why don’t we stop them?  Apparently Mr. Kerry believes there is something ‘sectarian and religious’ about bringing natural gas from Qatar to Europe through a proposed pipeline through Syria.  Since almost 25% of Europe’s natural gas comes from Russia’s Gazprom, the Russian angle becomes clear.  But if Americans aren't buying the WMD story, it’s even more unlikely they would support a war to reduce Gazprom’s market share in Europe.

Democracy is a messy business and if we had one, we would be reminded of it constantly.  However, we live in a plutocracy where public opinion is created through corporate media.  The fabricated message being sent is that Muslims are the enemy and Israel is our closest ally.  Israel, however, does have a real problem with its Muslim neighbors, especially Syria, Iran, Lebanon and the Palestinian state it occupies.  In a democracy there would be a stormy debate as to whether Israel’s security has any bearing on America's well being and it would be openly argued for America to jettison the ‘special relationship’ with Israel.

This debate never occurs in America because it’s corporate media has a strong pro-Israel bias and questioning the 'special relationship' with Israel is taboo.  Both those in and outside the US Government who strongly believe that America must stand by the Jewish state are being faced with the reality that the moment for action has passed and the pendulum is beginning a long journey back toward isolationism and cynicism regarding the state security apparatus.

Syria is their last chance and it is quickly slipping through their fingers.  If there is no attack on Syria,  the chances of attacking Iran will quickly fade to zero.  If one believes that there is a grand strategy then we have reached a critical and dangerous moment.  If Obama backs down and doesn't attack, he will lose enough international credibility to make him a de-facto foreign policy lame duck just as the Iranians cross the nuclear threshold.  This is unacceptable to those bent on protecting Israel’s monopoly on nuclear weapons in the Middle East.

It seems highly unlikely that this group of people will allow President Putin to become the new voice of reason in the region.  The absurdity of Assad committing this gassing, Putin’s argument, is now also being supported by intelligence as reported in a Huff Post article which quoted a report that seems to contradict the Obama Administration's claim that Assad was the perpetrator of the gas attack.  It would be catastrophic to the US standing in the world if it were proved that this was a false flag attack by the rebels in Syria, and more importantly it would make it almost impossible to make a case for the ultimate target, Iran.

It’s difficult to fathom that those who brought us the war in Afghanistan, Iraq, Libya, the NSA surveillance apparatus, The  Department of Homeland security and the drone war will simply take their bows and fade away.  Their only options at this point are either to force the issue in Syria and quickly escalate it through their time honored method of rallying the home front with images of horrors committed on innocents, or throw up their hands and accept defeat.