by Ambrose Evans-Pritchard
Originally published in the The Telegraph, November 30, 2010

Stripped to its essentials, the €85bn package imposed on Ireland by the Eurogroup and the European Central Bank is a bail-out for improvident British, German, Dutch, and Belgian bankers and creditors.

The Irish taxpayers carry the full burden, and deplete what remains of their reserve pension fund to cover a quarter of the cost.

This arrangement – I am not going to grace it with the term deal – was announced in Brussels before the elected Taoiseach of Ireland had been able to tell his own people what their fate would be.

The Taoiseach said afterwards that Brussels had squelched any idea of haircuts for senior bondholders: a lack of “political and institutional” support in his polite words: or “they hit the roof”, according to leaks.

One can see why the EU authorities reacted so vehemently. Such a move at this delicate juncture would have set off an even more dramatic chain reaction in the EMU debt markets than the one we are already seeing.

It is harder to justify why the Irish should pay the entire price for upholding the European banking system, and why they should accept ruinous terms.

I might add that if it is really true that a haircut on the senior debt of Anglo Irish, et al, would bring down the entire financial edifice of Europe, then how did any of these European banks pass their stress tests this summer, and how did the EU authorities ever let the matter reach this point? Brussels cannot have it both ways. 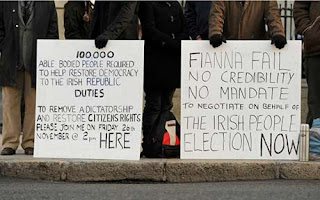 Ireland did not run large fiscal deficits or violate the Maastricht Treaty in the boom years. It ran a fiscal surplus, (as did Spain) and reduced its public debt to near zero. German finance minister Wolfgang Schauble keeps missing this basic point, but then we don’t want to disturb a comfortable – and convenient – German prejudice.

Patrick Honohan, the World Bank veteran brought in to clean house at the Irish Central Bank, wrote the definitive paper on the causes of this disaster from his perch at Trinity College Dublin in early 2009.

Entitled “What Went Wrong In Ireland?”, it recounts how the genuine tiger economy lost its way after the launch of the euro, and because of the euro.

A (positive) interest shock of this magnitude in a vibrant fast-growing economy was bound to stoke a massive credit and property bubble.

“Eurozone membership certainly contributed to the property boom, and to the deteriorating drift in wage competitiveness. To be sure, all of these imbalances and misalignments could have happened outside EMU, but the policy antennae had not been retuned in Ireland. Warning signs were muted. Lacking these prompts, Irish policy-makers neglected the basics of public finance.”

“Lengthy success lulled policy makers into a false sense of security. Captured by hubris, they neglected to ensure the basics, allowing a rogue bank’s reckless expansionism,” he wrote.

Let me add that the ECB ran a monetary policy that was too loose even for the eurozone as a whole, holding rates at 2pc until well into the credit boom and allowing the M3 money supply to expand at 11pc (against a 4.5pc target). The ECB breached its own inflation ceiling every month for a decade. It did this to help Germany through its mini-slump, and in doing so poured petrol on the bonfire of the PIGS. So please, NO MORE HYPOCRISY FROM BERLIN.

The truth is that the EMU venture is one of shared culpability. Yes, the Irish should have regulated their banks properly and restricted mortgages to a loan-to-value ratio of 80pc, 70pc, or 60pc, forcing it down as low as needed – as Hong Kong and Singapore do – to stop idiotic bubbles.

But almost nobody understood the implications of monetary union: in Dublin, in Berlin, in Brussels, and Frankfurt. They were almost all beguiled, (though I doubt that the ECB’s Axel Weber and Jurgen Stark ever were).

Given this, why should the Irish people accept the current terms? As Citigroup said in a note today, the EU part of the package will come at around 7pc — higher than the fee paid by Greece. This is pena

By 2014, interest payments on Ireland’s public debt (then 120pc of GDP) will be €10bn, while tax revenues will be €36bn. This ratio is well above the average default trigger of 22pc, as calculated in a Moody’s study.

Nominal Irish GNP has contracted by 26pc since the peak. It is nominal, not real, that matters for debt dynamics.

Ireland is in a classic debt-deflation trap , as described by Irving Fisher in his 1933 Economica paper.

Yes, it has a very vibrant export sector, and can perhaps claw its way out of the trap – which Greece and Portugal cannot hope to do in time, in my view. In a way that makes the choice even harder.

The question is, should the Dail vote against the austerity budget on December 7, Pearl Harbour Day. And should the next government – with Sinn Fein in the coalition? – tell the EU to go to Hell, do an Iceland, wash its hands of the banks, and carry out a unilateral default on senior debt by refusing to extend the guarantee?

The risks are huge, but then the provocations are also huge. And there is a score to settle. Did the EU not disregard the Irish `No’ to Lisbon, just as it disregarded the first Irish `No’ to Nice? Did it not trample all over Irish democracy?

It is not for a British newspaper to suggest which course to take. Both outcomes are ghastly, but as one Irish reader wrote to me: if Eamon De Valera could defy world opinion in 1945 by sending condolences to Germany for the death of the Fuhrer, today’s leaders need not worry too much about scandalizing those who made them swallow Lisbon.

Compliance is traumatic. Default is traumatic. What the Irish have before them is a political choice about what they wish to be as a people, and a nation.

Let me finish with a few words by Dan O’Brien, the Economics Editor of the Irish Times, that caught my eye.

“Nothing quite symbolised this State’s loss of sovereignty than the press conference at which the ECB man spoke along with two IMF men and a European Commission official. It was held in the Government press centre beneath the Taoiseach’s office. I am a xenophile and cosmopolitan by nature, but to see foreign technocrats take over the very heart of the apparatus of this State to tell the media how the State will be run into the foreseeable future caused a sickening feeling in the pit of my stomach.”