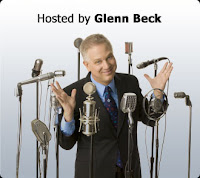 Glen Beck is enjoying his time in the spotlight: the cover of Time and a three part series in Salon, the Fox show, the books. His story is well known, precocious shock jock in the 1980’s and 90’s who matured into a conservative talk radio personality and finally, into the Rush Limbaugh mold of bestselling author and TV personality.

It is very easy to scoff at his fans and the man himself as immature and intellectually challenged. But there is something appealing about him and his world view. Conspiracy films like Loose Change and Zeitgeist: The Film have a similar appeal, a world of good guys and bad guys, it is like bad television from the 70’s, but people still flock to the re-runs of Kojak and SWAT.

A brief look at the career of Glen Beck and it is clear that he is not a thinker but rather a performer and an expert at creating PR stunts. His recent ramblings about the secret messages in Rockefeller Center are a perfect example. Does anyone think that Glenn Beck was looking at the murals in Rockefeller Center and suddenly realized that there was a secret message hidden in the paint? Of course not. He understands that the country loves conspiracy theories and the upcoming publication of the new Dan Brown mega bestseller about the Mason’s in America set the mood for him to delve into a little symbology. Beck is not a political thinker and beyond a childish patriotism and a middle aged Anglo-Saxon affinity for conservative politics, he has no real ideology.

Beck is the consummate manipulator. He will push and push until one day he explodes into a wild hysterical rage that will keep him off the airwaves for awhile. And where will Beck cross the line? He will touch the greatest taboo of modern American life. He will connect the obvious dots that no one dares connect and ask how the United States fall into the trap of serving Israel in its foreign policy and why are Jews so overrepresented in government, media, culture and public life in general. His instinct to be the bad child won’t allow him to stay away from that one, and it will be his undoing.

From a transactional psychology point of view (remember the book by Eric Berne, The Games People Play) Glen Beck is the consummate child, provoking the adult (the Democratic Obama supporter) and instigating the Republicans (Parents) who are tired of being parents for 8 years and starting wars and destroying the world economy and are just dying to be bad children again. Glen Beck is screaming to them, like Peter Pan, to go out and have fun with him. Why think? Why Read? Why have intelligent adult debates. It’s so much more fun to put on a funny costume and go tea-bagging (no sexual innuendo intended). Does anyone think this not complete Astroturf?

The “right-wing conservatives” are miraculously driven to the streets by a sudden sense of fiscal responsibility and abhorrence of big government? The government is taking over our economy and they are outraged out corporate bailouts? Please. The GOP started two wars AND cut taxes. No one budged. Lets not forget, according the FT “the top one percent of households have 44.1% of all privately held stock, 58.0% of financial securities, and 57.3% of business equity.” So who was the government bailing out with TARP? But now, that maybe we might have to raise taxes on that 1% to pay for the whole mess, we suddenly have spontaneous grass roots movements popping up all over the country. How simple can we be to not see this?

Glen Beck may not be a genius, but he does have good instincts and he can push the big collective buttons. People are afraid of a black President and a progressive congress, even if it will give them more security and peace of mind. The fears are much more deeply rooted than the worries of maybe not making ends meet. The United States has for years become progressively more divided: racially, ethnically, religiously, ideologically, culturally and most importantly, economically. This is one of our biggest taboos. The typical upper middle class American has very little in common with their urban poor counterparts, and there is a latent fear that one day the “other’ will wake up from a daze and began to ask some serious questions. Barack Obama represents that other, and Glen Beck is tapping the fear.

The sad part is that while Glen Beck has his fun at the expense of a productive national debate on important issues like health care, education, economic recovery and the environment, the “1%” club continue to manipulate the oblivious masses who let themselves be herded like sheep into demonstrations to support the immense wealth of a miniscule minority who are working counter to their own middleclass well being.

The problem with America is we have become immature. My father was born in 1922 and my mother in 1930. They lived through epic world events and while God knows they were not perfect, they were able to engage in political debate and discourse in a mature way. War was bad, only when absolutely provoked and necessary, Dogma was dangerous, beware of it, and Government had to toe a difficult line between maintaining the governmental infrastructure, public works and helping out folks who really had problems while paying for it all with taxes. Being on the left or on the right was usually only a nuance of the last point.

The mess we are in now is monumental, and the whole house of cards is swaying, more than most would like to admit. This is the time for people to snap out of the childish mode of borrow and spend, pay later, fix it later, the environment and oil will hold up attitude. But instead of beginning a mature, civilized and PRODUCTIVE national debate, we are led around by Republic operatives and children like Glen Beck. We still our The People, and while most of us may not have millions, we have hands, strong backs and the fortitude that money can’t buy. It is time we used them.