What I Learned From Sargent Shriver 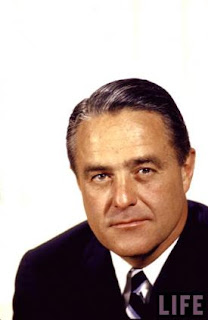 The Irish saw the Kennedys as our own royal family out on loan to America. A million of them turned out on J.F.K.’s homecoming to see these patrician public servants who, despite their station, had no patience for the status quo. (They also loved that the Kennedys looked more WASP than any “Prod,” our familiar term for Protestant.)

I remember Bobby’s rolled-up sleeves, Jack’s jutted jaw and the message — a call to action — that the world didn’t have to be the way it was. Science and faith had found a perfect rhyme.

In the background, but hardly in the shadows, was Robert Sargent Shriver. A diamond intelligence, too bright to keep in the darkness. He was not Robert or Bob, he was Sarge, and for all the love in him, he knew that love was a tough word. Easy to say, tough to see it through. Love, yes, and peace, too, in no small measure; this was the ’60s but you wouldn’t know it just by looking at him. No long hair in the Shriver house, or rock ’n’ roll. He and his beautiful bride, Eunice Kennedy Shriver, would go to Mass every day — as much an act of rebellion against brutal modernity as it was an act of worship. Love, yes, but love as a brave act, a bold act, requiring toughness and sacrifice.

The Peace Corps was Jack Kennedy’s creation but embodied Sargent Shriver’s spirit. Lyndon Johnson declared war on poverty but Sarge led the charge. These, and the Special Olympics, were as dramatic an incarnation of the ideas at the heart of America as the space program.

Robert Sargent Shriver changed the world more than a few times and, I am happy to say, changed my world forever. In the late ’90s, when the Jubilee 2000 campaign — which aimed to cancel the debts that the poorest nations owed to the richest — asked me to help in the United States, I called on the Shriver clan for help and advice. What I got were those things in spades, and a call to arms like a thump in the back.

In the years since, Bobby Shriver — Sarge’s oldest son — and I co-founded three fighting units in the war against global poverty: DATA, ONE and (RED). We may not yet know what it will take to finish the fight and silence suffering in our time, but we are flat out trying to live up to Sarge’s drill.

Eulogy for a Brother

I have beautiful memories of Bobby and me sitting with his father and mother at the Shrivers’ kitchen table — the same team that gazed over J.F.K.’s shoulder — looking over our paltry attempts at speechifying, prodding and pushing us toward comprehensibility and credibility, a challenge when your son starts hanging round with a bleeding-heart Irish rock star.

A Sense for Freedom

Toward the end, when I visited Sarge as a frailer man, I was astonished by his good spirits and good humor. He had the room around him laughing out loud. I thought it a fitting final victory in a life that embodied service and transcended, so often, grave duty, that he had a certain weightlessness about him. Even then, his job nearly done, his light shone undiminished, and brightened us all.